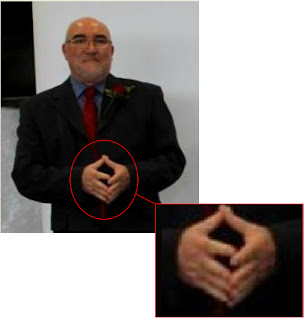 What is the Labour Mayor of Salford City Council doing, what is this signal and who is it for?

This is a signal of corruption and is more proof that it rises straight to the top, the hand signal is one from the funny hand shake band of bothers called the freemasons, who hold very regular and very secret meetings that reflects on every Salfordians life.

Now, if someone asked you "What is a Mason?". Maybe you'd think, as we used to believe, that Freemasonry is simply a secretive organization for starchy old men with nothing better to do, that consists of rolling up your trouser legs, wearing a leather apron and giving funny handshakes.

Some people have argued that Freemasons shouldn't be criticised because they raise large sums of money for charitable causes (something which is certainly very commendable). But then, plenty of other organisations have also raised a lot of money for charity - without feeling any need to indulge in secret rituals, award each other grandiose titles, or swear oaths to cover each other's backs. Further, we must also be careful that charity fundraising is not being abused as a cover for sexual abuse, as seems to have been the case with Jimmy Savile, during his lifetime.

For most of us, charity means giving help to those in need - regardless of age, belief, disability, gender, pregnancy, race or sexual orientation - but studying the Freemason organization, charity for them seems to mean manipulating Gift Aid and the favourable tax treatment afforded to charities, so that they can give more to themselves and their friends.

To illustrate this, if you visit the United Grand Lodge of England webpage, you can click on the "Charitable Work" link, and discover that Freemasons channel their charitable efforts through four charities. Then, if you check the eligibility requirements for each of those supposed charities, you will see that they all restrict their help to Freemasons, former Freemasons and close dependents of Freemasons.

Therefore, if you give money to one of the Masonic Charities, you might believe that you are supporting worthy local causes, but in fact all you are likely doing is making a payment into some Freemason's Healthcare scheme, Insurance policy or Pension pot, etc.

Researching a little deeper into Freemasonry, we find that the Masons are to be found behind quite a number of scandals and outrages over the years - Mozart's death, Licio Gelli and the Propaganda Due outrage, the murder of Roberto Calvi (God's Banker), the disgraceful treatment of former Chief Inspector Brian Woollard, whilst just recently it has transpired that Norwegian mass murderer Anders Behring Breivik is also a Mason. The list seems endless.

A hint to the skulduggery indulged in by Freemasons is given in the writings of Albert Pike, who penned the Masonic guidebook "Morals and Dogma", in which he affirms:

Masonry [...] conceals its secrets from all except the Adepts and Sages, or the Elect, and uses false explanations and misinterpretations of its symbols to mislead those who deserve only to be mislead; to conceal the Truth, which it calls light, and draw them away from it. [pages 104-5]

Regardless of what you believe, the Freemason's United Grand Lodge of England claims to have about 400,000 members throughout the United Kingdom and Ireland; a high percentage of which turn out to be Public servants, or Members of Parliament (Two Masonic Lodges operate in the Palace of Westminster, and nearly every Lord Mayor of London since the start of the last century has been a Freemason). Oftentimes, these characters also turn out to have rather dubious personal histories.

It's also undisputed that Freemasons spend a lot of their time adorning themselves with vainglorious titles, Masonic medals, robes and finery. Then, in everyday life, they will use Square and Compasses jewellery, along with similar accessories, to covertly indicate their Masonic membership to other Freemasons, and thereby surreptitiously be able to obtain preferential treatment, to the detriment of the Profane (the label that Freemasons give us non-Masons).

Most importantly, Masonic Public servants - who should be putting the interests of the British public first in their day-to-day duties, will have taken blood-curdling oaths to always put the interests of other Freemasons before anyone else, when they were initially recruited into the organization - under no less penalty than ritual murder, mutilation and being disappeared like the victim of a South American Death squad.

In fact, Cecil Rolph Hewitt, Criminologist, Author, Journalist and former Vice-President of the Howard League for Penal Reform, who joined the City of London Police in 1921, and writing as C. H. Rolph, in an article for the weekly news magazine Police Review in September 1981, said:

I saw enough chicanery and favouritism fostering Freemasonry in the Police service to satisfy me that it ought to be barred. It wasn't so much that the Masons got actual preferment (though I'm sure some of them did); they believed they would, and the belief devalued their characters in a way that was as odd as it was disturbing.

Previous to that in 1969, David Thomas, a former Head of Monmouthshire CID, stated:

[T]he insidious effect of Freemasonry among the Police has to be experienced to be believed.
More recently, PC Kitit Gordhandas, from West Yorkshire Police, wrote to Police Review saying:

I feel that Freemasonry stands for white, male, middle-class members working for the advancement of themselves and their fellow Masons.

It appears highly likely then, that Freemasons do perform acts of mutual advancement and improper favour-swapping. Both of which are actions that any right-minded person would agree are incompatible with being a Public servant, and which should preclude that person from taking part in any sort of Public Office.

As the old saying goes "No man can serve two masters".

To solve similar problems, millions of Public servants sign the Official Secrets Act, which curbs their right to publish, discuss or otherwise disseminate information which they may learn in the course of their work. Additionally, members of the Armed forces and the Police surrender their civil liberty to withdraw their labour and go on strike. Whilst no Civil servant or Policemen is allowed to stand as a candidate in local or national elections without first having resigned from his or her employment.

Therefore, imposing a similar curb on members of the Police service and Civil servants in respect of Freemasonry has an undeniable precedent. People would retain the right to join shadowy organizations that swear oaths to support their own members ahead of everyone else, such as the Freemasons, the Knights of St. Columba or the Order of the Eastern Star - but they would then lose the right to remain as Policemen or Civil servants, etc.

This same rule could then be imposed upon other Public servants, such as MPs, Judges, Magistrates and Local Councillors - After all, these selfsame officials regularly tell us that "Those with nothing to hide have nothing to fear".

So, until this happens, it is not enough for Public servants to claim that they behave with integrity. They must been seen to be doing so too. Therefore, since most of the general public still knows very little about who is or isn't a Freemason, they are being kept in the dark as to whom they can trust, when it comes to dealing with MPs, Judges, Lords, Magistrates, Barristers and members of the Police, etc.


The very word 'secrecy' is repugnant in a free and open society; and we are as a people inherently and historically opposed to secret societies, to secret oaths, and to secret proceedings. ~~ John F. Kennedy

Now bringing it back to Ian Stewert and Salford, looking closer in to the freemason contection, and to just explain this hand signal, and just who it was to, another interesting charater Brian Everall, the magistrate and close freind of the mayors

Brian Everall is, amongst other things, Editor of the left wing, council funded 'news' website, Salfordonline (www.salfordonline.com). He also seems to get favoured by Salford Council when contracts are to be handed out to promote and advertise council activities. Brian Everall is also listed as a past assistant grand director of ceremonies of the United Grand Lodge of England whose Grand master is none other than Brro. HRH the Duke of Kent KG..

Source: http://www.bilderberg.org/ukofficers.pdf (Check the sixth name from the top on page 8 of this document).

Brain and Ian's hands are dirty, another scam is Salford Business Expo where personally invited Eccles and district group of freemason's to an event held at Salford Rugby Ground to recruit and do business with the elite, other such http://www.westlancsfreemasons.org.uk/2012/11/eccles-and-district-group-at-salford-business-expo/ other people who attended the event held and organised by Brain Everall was the BBC, Salford Advertiser, Manchester Evening News, Salford Council and Salford Colleges
Posted by SALFORD COUNCIL WATCH at 11:33